A downloadable game for Windows and macOS

Be the last witness of a dying clan, which is cursed to have their skin and flesh slowly fall off and decide, after listening to their story, what you want to do with the one responsible for this.

Vivamus in Fabula is a short dark fantasy visual novel of around 1000 words, including a bonfire, medieval Irish art, dying people and relaxing music.

You can get 2 endings!

Short but sweet, in a melancholy way; the attention given to the music, and to the border that frames the game like the margins of a storybook or a medieval illustrated text, really created an enchanting atmosphere! The idea of a "cage cup" is intriguing, and the game seemed like a brief glimpse into a much wider world.

Ending-wise, though I got both, I did the "Destroy" ending first and feel as if it's the correct one, at least for myself: There's no guarantee of being able to undo the curse, the rest of the clan is dead and there's no way of knowing if Fergal's brother could ever be freed. Additionally, there's no hint that the viewpoint character is immortal, meaning I can't promise that the cup won't end up lost or forgotten, leaving the brother alone and possibly mad from solitude for eternity. Either way, the story outlives its characters. Nice job!

I saw this during Professor Oneira’s stream and really liked it – I’m usually a bit hesitant to read sad things but you did it so well and there were so many interesting ideas to think about.

I loved the idea of the story collector, and the different types of curses… and there was a surprisingly sweet sense of resolution from one of the endings (even if the other one had a great use of the one sound effect)! The art was also gorgeous, and all the attention to detail in the border, the costuming and even the font really helped paint a picture of what the setting was like.

Oh and I loved Fergal’s expressions too! How you made him so cute with only half a face I will never know…

Awww thank you so much for this detailed comment! I'm glad that all the details I put in got noticed :3 And lol, you're not the first person to say that about his face xD

Reply
Let's All Get Along~120 days ago

It was a short little story but I couldn't help but have my heart strings tug when the guitarist asks you to take care of his little brother. I couldn't bear to destroy it so I did, I only hope that we can be able to break the curse and let the little brother be free while we research for a way to stop the Emiri Clan's curse. Great short story, truly hoped that the Emiri Clan has found peace.

AWW, now YOU tugged at my heart strings T_T I'm so happy about your comment! Thank you for playing and spending time with the Emiri Clan <3

This was such a touching little story! The combination of the music and beautiful art created such a melancholy little vibe that stuck with me even after I finished it. Also it left me with so many more questions that now I want to see explored about the characters and their histories and stories. I chose to keep the cup :)

Awwww thank you so much for the sweet sweet comment! 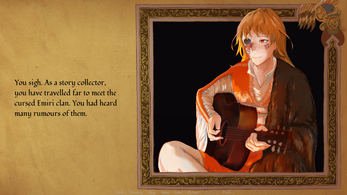